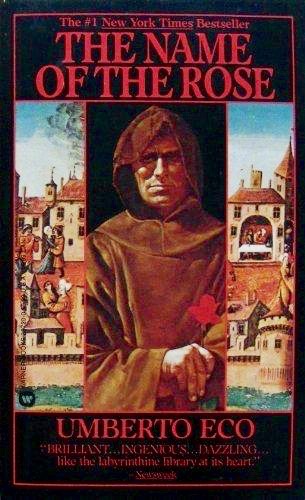 THE NAME OF THE ROSE was the fiction debut of the Italian author Umberto Eco. A murder mystery set in a medieval monastery, it’s one of the most popular books ever written. More than fifty million copies have been sold worldwide, and it was made into a very successful film starring Sean Connery.

‘Books always speak of other books, and every story tells a story that has already been told.’ – Eco was an eminent professor of semiotics at the University of Bologna, so it’s unsurprising that his novel is multi-layered, multilingual, and full of intertextual allusions to other works and writers, notably Jorge Luis Borges and Sherlock Holmes. The central premise [*spoiler alert* – death by poisoned book] also features in Alexandre Dumas’ 1845 novel LA REINE MARGOT, and in the Chinese erotic classic JIN PING MEI (translated by Clement Egerton and Lao She in 1939 as THE GOLDEN LOTUS, and by David Tod Roy in 1993 as THE PLUM IN THE GOLDEN VASE).

Eco’s linguistic interests also extended to translation. His lectures on the subject are collected in EXPERIENCES IN TRANSLATION (tr. Alastair McEwen), and MOUSE OR RAT? TRANSLATION AS NEGOTIATION, for which no translator is named, so we must assume that Eco wrote these Oxford lectures in English. Eco also translated two books from the French: SYLVIE (Gérard de Nerval) and EXERCISES DE STYLE (Raymond Queneau).

We’ve already met the distinguished William Weaver, translator of THE NAME OF THE ROSE, in #TA60 1981 (with Italo Calvino’s IF ON A WINTER’S NIGHT A TRAVELLER). Weaver earned substantial royalties from translating Eco; they enabled him to build an extension to his farmhouse in Tuscany which he called his ‘Eco chamber’.

How many children’s books have (for better or worse) changed the course of political history? JENNY LIVES WITH ERIC AND MARTIN, written by Susanne Bösche and illustrated by Andreas Hansen, was probably the first children’s book to feature openly gay parents. Bösche has said she wrote the book, in which a patchwork family is depicted leading a perfectly normal life, ‘because I became aware of the problems which some children face when meeting family groupings different from the ones they are familiar with’. Louis Mackay’s English translation, from the original Danish, was published in the UK in 1983.

Three years later, inaccurate newspaper reports that children were being allowed to access the book in a school library led to it being branded homosexual propaganda, condemned in Parliament, and cited in the passing of the controversial Section 28 law. (In fact, only one copy had been purchased by one school, and this was available only to teachers.) Section 28 stated that local governments and schools should ‘not intentionally promote the teaching of the acceptability of homosexuality as a pretended family relationship’. Council libraries were unable to stock books and films with LGBT+ themes, and teachers were prohibited from talking about same-sex relationships. Section 28 remained in force for fifteen years before it was finally repealed across the UK.

A final notable entry for 1983: WOMAN AT POINT ZERO by the Egyptian author, psychiatrist and feminist activist Nawal el Saadawi, translated from the Arabic by Sherif Hetata. The novel is based on a series of encounters between el Saadawi and Firdaus, an inmate in Egypt’s largest women’s prison, while the author was researching a non-fiction work about women and neurosis. Firdaus was condemned to hang for murdering a man. El Saadawi’s retelling of her story highlights the oppression and subjugation of women in Egyptian society.

I leave you with a quote from Michael Hofmann’s review of Eco’s MOUSE OR RAT? :

‘In the English-speaking world (ha!), there is very little empathy with translators. Most readers don’t have any experience of translating, or indeed of another language at a serious level. […] The background of such ignorance and lack of experience has left an odd nimbus or whiff around translation. People don’t know how to talk about it, and so they don’t like to talk about it. Translation is perceived either in terms of clarity and faithfulness (Eco does it too), or in terms of mistakes, which is banal, because everyone makes mistakes. […] But really, there is no mystery. If you have a good time with a book, praise the author; if you have a good time with a paragraph, praise the translator (as well).’

Literary translator from Arabic, German and Russian into English View all posts by Ruth Ahmedzai Kemp