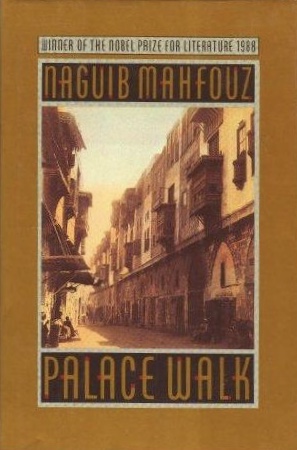 PALACE WALK, the first volume of the Cairo Trilogy by the Egyptian author Naguib Mahfouz, was published in 1990 in a translation from the Arabic by William Maynard Hutchins and Olive E. Kenny. Mahfouz had won the Nobel Prize for Literature two years earlier; the first and, so far, the only Arab writer to have done so. Doubleday editor Jacqueline Kennedy Onassis immediately snapped up the rights to several of his books and oversaw the translation of PALACE WALK.

Originally written in the 1950s, the Cairo Trilogy is an engrossing saga that follows three generations of a well-off Muslim family in Cairo, from the start of the Egyptian revolution against the British in 1919 to the end of World War Two. The English editions were published in successive years: the second volume, PALACE OF DESIRE (translated by W.M. Hutchins, O.E. Kenny and Lorne M. Kenny), came out in 1991, SUGAR STREET (translated by W.M. Hutchins and Angele Botros Samaan) in 1992.

Mahfouz is regarded as one of the fathers of the modern Arabic novel. In the seven decades of his career, he published 34 novels and hundreds of short stories. The Nobel win was transformational – not so much for Mahfouz, who by all accounts continued to live a modest life, but for the sudden interest it sparked in Arabic literature. Shortly after winning the prize, Mahfouz commented:

“The Nobel Prize has given me, for the first time in my life, the feeling that my literature could be appreciated on an international level. The Arab world also won the Nobel with me. I believe that international doors have opened, and that from now on, literate people will consider Arab literature also. We deserve that recognition.”

Other major translations of 1990 include TOO LOUD A SOLITUDE by Bohumil Hrabal (#TA60 1989), in which a paper baler secretly salvages and reads the outlawed books he’s supposed to be pulping.

Michael Henry Heim, who translated Hrabal’s book from the Czech, was one of the finest and most admired translators of his generation. (See #TA60 1984 for his work with Milan Kundera.) After initially studying under Gregory Rabassa, he focussed on Slavic languages and literature, which he taught for forty years at the University of California. Heim was a true polyglot. He mastered twelve languages and translated from eight – Czech, Russian, Serbo-Croatian, French, Italian, German and Dutch.

After his death in 2012, it was revealed that he was the anonymous donor behind the PEN Translation Fund, established in 2003 to support translators and promote literature in translation. You can read more about the remarkable Michael Henry Heim in this obituary from UCLA. Do watch the lovely short video in which he relates personal anecdotes – in four languages – explaining his belief that motivation is the key to successful language learning.

Also published in English for the first time in 1990: Clarice Lispector’s NEAR TO THE WILD HEART, translated from the Brazilian Portuguese by Giovanni Pontiero (#TA60 1972). A new translation by Alison Entrekin was commissioned in 2012 as part of New Directions’ Lispector series, previously mentioned in #TA60 1989.

Too Loud a Solitude

Near to the Wild Heart 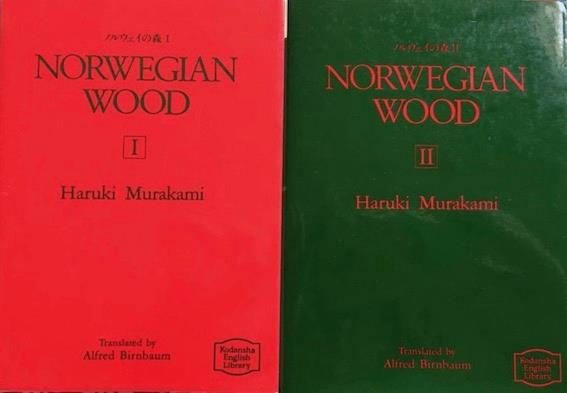 Haruki Murakami’s NORWEGIAN WOOD was published by the Tokyo publishing house Kōdansha in 1987. Set in the late Sixties, this novel of love, loss, nostalgia and sexual awakening was a phenomenal success, especially among young Japanese – so much so that the author moved abroad to escape his sudden fame.

Two years later, in 1989, Kōdansha also published the first English translation – by Alfred Birnbaum – for inclusion in its English Language Library. Aimed at Japanese students of English, the two pocket-sized volumes retained the red-green colour scheme of the original, and included an appendix listing English phrases alongside the corresponding text in Japanese.

Birnbaum’s translation was not made available outside Japan, and is now no longer in print. It was eleven years before a second translation, by the American academic Jay Rubin, was authorised for publication and distribution abroad. The tone and style of the two English translations of NORWEGIAN WOOD are quite different, as you can see in this link comparing them with the original Japanese; or this one, which provides a more thorough analysis of context and detail.

Rubin’s version, published by both Vintage and Harvill in 2000, is the one most anglophone readers will know. In a 2011 interview, he was asked how closely Murakami was involved in the translation of his own work:

“I ask him questions by e-mail now and then, and he responds in a timely fashion; 75% of the time he answers, ‘Do whatever works in English.’ He wants the book to succeed as literature in the target language rather than slavishly adhering to his grammar or sentence structure. He’s a very experienced translator, after all.”

Murakami is an admirer of classic American novels, and has translated several into Japanese. These include F. Scott Fitzgerald’s THE GREAT GATSBY, J.D. Salinger’s THE CATCHER IN THE RYE, and books by Raymond Carver, Raymond Chandler, Truman Capote and John Irving.

I SERVED THE KING OF ENGLAND by Bohumil Hrabal was published in English in 1989, just before Czechoslovakia’s Velvet Revolution. It was translated from the Czech by Paul Wilson. Wilson taught English in Prague for ten years, where he was also the vocalist of the famous ‘underground’ rock band The Plastic People of the Universe. He was expelled from Czechoslovakia in 1977 and, on returning to Canada, became a translator and champion of dissident Czech writers, notably Bohumil Hrabal and the future Czech president Václav Havel.

Written in 1971 and set in Prague during the Nazi occupation and the early days of communist rule, I SERVED THE KING OF ENGLAND follows the picaresque adventures of a Czech waiter and hotelier named Dítě. It was made into a successful film by the director Jiři Menzel in 2008. The novel circulated in unofficial form for years, until in 1983 the Jazz Section of the Czech Musicians Union published a private edition of 5,000 copies – for members only. The Jazz Section was legally constituted as an organisation for jazz fans, so was permitted to produce an uncensored newsletter for its members. However, this ‘newsletter’ reported not only on jazz, but on art and literature from all over world: it became the most widely read uncensored source of cultural information in communist Czechoslovakia.

Finally, 1989 also saw the publication of the first English translation from the Portuguese, by Elizabeth Lowe & Earl Fitz, of THE STREAM OF LIFE by the great Brazilian writer Clarice Lispector. This lyrical monologue, a stream of consciousness that many consider her masterpiece, was retranslated in 2012 by Stefan Tobler under the original title, ÀGUA VIVA. It is part of the collection of Lispector’s works in English translation published by New Directions and Penguin Classics.

I Served the King of England
https://www.waterstones.com/book/i-served-the-king-of-england/bohumil-hrabal/adam-thirlwell/9780099540939 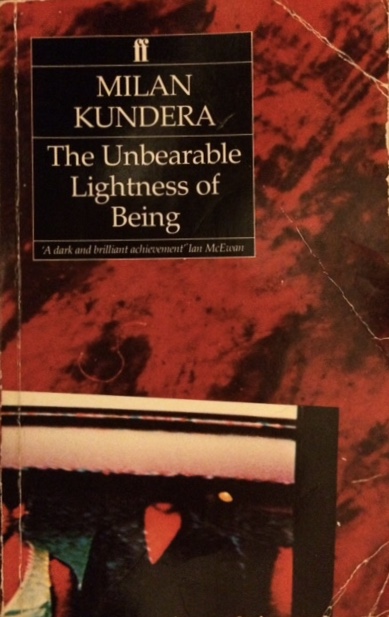 Milan Kundera’s novels were banned in his native country of Czechoslovakia, so for many years he was read almost exclusively in translation. His best-known work is probably THE UNBEARABLE LIGHTNESS OF BEING, a tale of love, infidelity and ‘improbable fortuities’ against the backdrop of the Prague Spring. It was written after Kundera went into self-imposed exile in Paris in 1975, and first appeared in 1984 in the French translation by François Kérel. Michael Henry Heim’s English translation followed soon afterwards, but it wasn’t until the following year that it was published in the original Czech – by a Toronto-based publishing house, Sixty-Eight Publishers. This was run by two other émigré writers, Josef Škvorecký and Zdena Salivarová. The book was finally published, and became easily available, in the Czech Republic in 2006; until then most people only knew it from the film starring Daniel Day-Lewis and Juliette Binoche. This new edition, which was substantially reworked by the author, became an instant bestseller.

Kundera became a French citizen in 1981. Around this time he began to write in French. On discovering that relay translators were working from the French translations of his earlier books, he proceeded to revise them and eventually declared these his new ‘originals’.

Kundera is famously mistrustful of translators. ‘Alas,’ he has said, ‘our translators betray us… You have no idea how much time and energy I have lost correcting the translations of my books.’ He demands full editorial control, insists on close collaboration with the translator wherever possible – particularly in English and French – and has often changed his mind about whose work he does or does not approve. The vexed history of his relationship with his translators, translations, and translation is detailed in a fascinating study by Michelle Woods, TRANSLATING MILAN KUNDERA – well worth a read.

Also in 1984, Primo Levi’s haunting memoir of life as a Jew in Mussolini’s Italy, THE PERIODIC TABLE, was translated into English by Raymond Rosenthal. A collection of twenty-one autobiographical stories themed by chemical elements, the Royal Institution declared it the best science book ever written, ahead of works by Charles Darwin and James Watson. (For more Primo Levi, see #TA60 1959.)