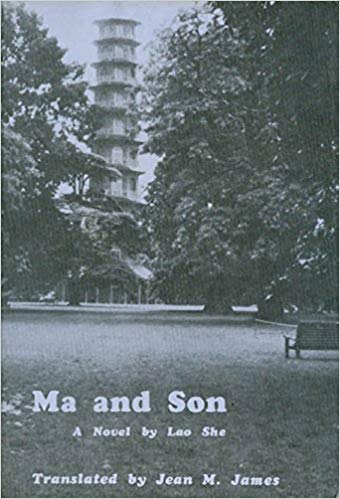 Novelist and dramatist Lao She was a leading figure in 20th century Chinese literature, specialising in humorous and satirical novels and short stories. His comic masterpiece MR MA AND SON has been translated into English four times since it came out in China in 1931. The version by Jean M. James was the first to be published, by the Chinese Materials Centre in 1980. This one is no longer available, but in 2014 Penguin Modern Classics published a fresh translation by William Dolby, notable for its convincing use of English idiom.

Born to a poor family in Beijing in 1899, Lao She – real name Shu Qingchun – travelled to London in the 1920s to lecture in Mandarin at what was then the School of Oriental Studies. A blue English Heritage plaque at 31 St James’ Gardens in Notting Hill commemorates the five years he spent living in London – he is the only Chinese person to date to be honoured in this way. While in London Lao She read widely; he was particularly impressed by Dickens and by Modernist writers such as Joyce and Conrad.

MR MA AND SON draws on his experiences of the London of this period. It depicts life in the area then known as Chinatown, which prior to its destruction in World War Two was a small community located around Limehouse docks in the east of the city. The eponymous protagonists are shopkeepers struggling to find their feet in English society. Lao She’s book details the unfriendliness, racial and class discrimination and narrow-minded patriotism the Mas encounter, providing an alternative, Chinese perspective on 1920s Sinophobia. The author’s mordant wit makes it a hilarious as well as discomfiting read.

Another Chinese classic first published in English in 1980 – but written in 1598! – is THE PEONY PAVILION by Tang Xianzu. A tragicomic romantic opera and panorama of Chinese society, it’s a masterpiece of Ming dynasty drama. Cyril Birch’s translation captures (I am told) the elegance, lyricism and subtle, earthy humour of the original, and has been used for some spectacular productions.