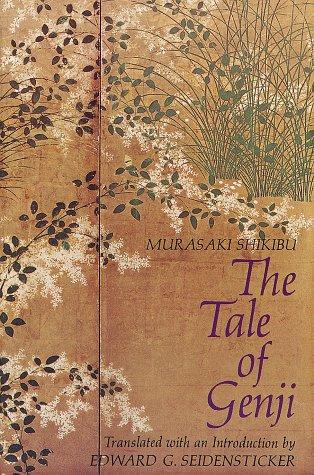 Edward Seidensticker’s translation of the Japanese literary classic THE TALE OF GENJI was published in 1976. Written in the 11th century by Murasaki Shikibu, a noblewoman and lady-in-waiting at the Japanese imperial court, this monumental work provides an insight into the lives of high courtiers at the peak of the Heian period. It’s often described as the first modern novel because of its narrative complexity, psychological insight and large cast of characters.

Two translations of THE TALE OF GENJI had already been published prior to 1976. However, as Suematsu Kenchu’s 1882 version was a partial one, and Arthur Waley’s celebrated six-volume translation, published between 1921 and 1933, omitted a chapter, I’m arguing for Seidensticker’s as the first complete translation so I can sneak it into the #TA60. 🙂

Waley’s version was extremely successful. It popularised the work with a Western audience and is still widely read today. However, Seidensticker’s 1976 translation is more faithful to the original while paring back some of its more florid elements. In an entertaining essay entitled ‘On Trying to Translate Japanese’, published in 1958, Seidensticker had commented:

‘One cannot be enthusiastic about the results thus far of literal translation from the Japanese. It has been responsible for the “by your honourable shadow” school […] [T]he pitch cannot be maintained for long. Most translators will decide, after the Oh’s and the Ah’s, after the blubbering that never seems to strike the Japanese as sentimental and therefore presumably isn’t, after pages on end in which ellipsis alternates with pleonasm, that something must be done.’

THE TALE OF GENJI recounts the life of Genji – son of the Japanese emperor and a low-ranking concubine, who becomes an imperial officer – amid the romantic and political intrigue of the Heian imperial court. The original novel is written in stylistically complex, archaic 11th century court language, and is inaccessible to ordinary Japanese readers. The first translation into modern Japanese was completed by the poet Akiko Yosano in the early 20th century. It’s quite common for people in Japan to read an annotated version.

Literary translator from Arabic, German and Russian into English View all posts by Ruth Ahmedzai Kemp